And That's The Way It Is 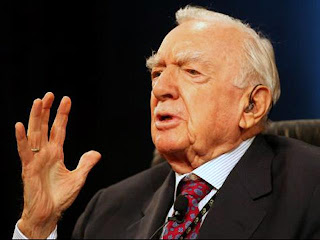 The most trusted man in America has passed away at 92, Walter Cronkite the legendary reporter, newsman and CBS anchorman died today.
I can't explain to the younger generation what it meant to watch "Uncle Walter" do the news on CBS. I remember him most for his coverage of the space race and the irony of this weekend's 40th anniversary of Apollo 11 landing on the moon, i had just turned 12 back in 1969 and was there watching the landing as Cronkite reported on it. When i think of the Apollo 11 i hear Cronkite's voice.
Goodbye Uncle Walter.
Posted by Drake at 10:05 PM