So i totally swiped this picture from the Samuraifrog of his wife so's i can say Happy Birthday to her here at the E. Banana! 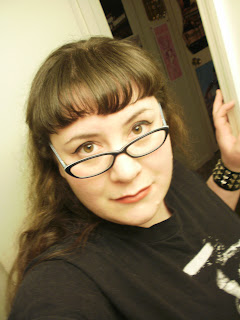 Happy Birthday Becca!
One of the most talented artists i know online and look she has glasses and is cute!
Our pal the Frog is a most lucky chap!

http://samuraifrog.blogspot.com/
Posted by Drake at 9:49 AM No comments:

We survived another end of the world day. I think that's a good thing...
Posted by Drake at 8:56 AM No comments:

Labels: end of the world 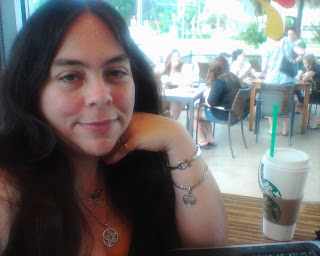 My Girl.
The beauty of my life and the gal i'd make my wife if she'd just say "yes". ;)
My Mur and being apart from her is killing me. Wish us together soon ok?
Posted by Drake at 5:25 PM 1 comment:

It's The End Of The World, Again

I mean how lucky are we to get two "End of the World!!!" aka "Rapture" days in 1 year? I'd forgotten that 90 year-old stroke victim preacher Haorld Camping (who's deep in hiding) predicted Oct. 21st to be the after Rapture after his first date this year was wrong (but not wrong really because May 21st was a " Invisible Judgement Day").
I know these people who predict the end of the world and really want it to happen are always wrong because if you read the Bible you're not supposed to know when it happens so if you announce the date it's not going to be the day....a bit of a Catch 22 there.
Oh well, if in some crazy way he's true, i love you guys! :)
Posted by Drake at 8:48 AM 1 comment:

Labels: end of the world

You Need Some Dave Clark 5!

Tired of seeing your pics on your blog pop up in that annoying "lightbox" Blogger forced on us? Well go over to Pictorial Arts and read this post on how to turn that off!
http://mydelineatedlife.blogspot.com/2011/10/just-say-no.html


Here's his visual aid he posted : 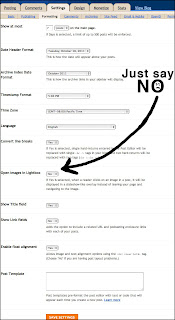 Thanks to Thomas Haller Buchanan of The Pictorial Arts!
Posted by Drake at 8:48 AM No comments:

One of my favorite songs of all time and it's about a dragon! As i get older i appreaciate Folk music more and more and here is one of the best Folk group ever, Peter Paul and Mary. Sadly we've lost Mary but the music is forever. Watch as the faces of the children light up when they hear the opening chords of Puff.

Reading Cal's post about him closing down his blog and the death of one of my favorite race car drivers and stuff in real life has pretty well depressed this morning.
Don't know why i blog and i'm thinking again of just shutting down and going away, i am easily depressed about things, have been my whole life.
The joy i get out of blogging these days is the Halloween posts i'm doing over at the Macabre Drive-In Theater.
Posted by Drake at 9:43 AM 2 comments: 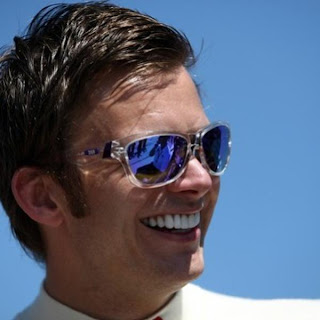 Indy 500 Champion Dan Wheldon has died from his injuries in today’s IRL race in Las Vegas, Dan was a IRL champion and 2 time winner of the Indy 500. Dan was 33 and leaves a wife and 2 young children.
Rest In Peace 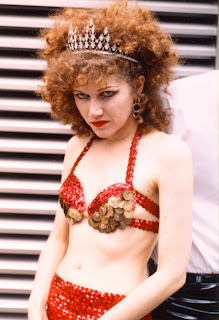 Poison Ivy of the Cramps. Beautiful redhead who played some of the best swampy,nasty sounding guitar ever. She's lost her partner in life Lux but i hope everything is going for her. Thankyou Ivy for all the great music.
Posted by Drake at 9:02 AM No comments: 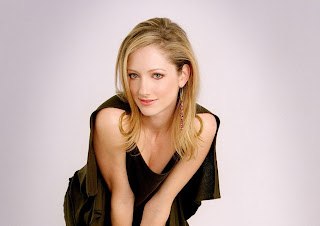 Judy is the only thing worth tuning in for on the once funny "Two and a Half Men". The show is like two different shows now, the funny stuff with Judy and Ashton and then the left-over part that sucks because Charlie is gone, you know the John Cryer part.
Too bad it dosen't look like Judy will be a regular cast member, hope i'm wrong on that.
Posted by Drake at 11:52 PM No comments:

Sam Nelson (son of Rick Nelson and grandson of Ozzie and Harriet) is trying to get all the episodes of Adventures Of Ozzie and Harriet restored and released to DVD.
Check the link to learn more and maybe help out.
http://www.kickstarter.com/projects/2100802854/ozzie-and-harriet-reviving-an-american-treasure
Posted by Drake at 11:26 PM No comments: 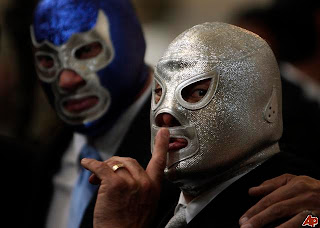 Silencio..shhhhhhhhhhhh
Posted by Drake at 3:43 PM No comments: 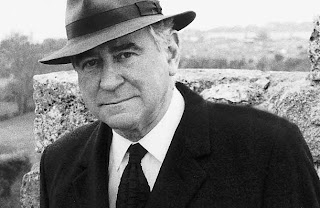 George Baker has passed away at 80. If you're a fan of British television and movies you'll know that face and name. He was in 2 Bond films and even dubbed George Lazenby for some scenes in OHMSS. His best remembered role is probably as Chief Inspector Wexford on a long running mystery series.
Rest In Peace Mr. Baker.
Posted by Drake at 10:00 AM No comments: 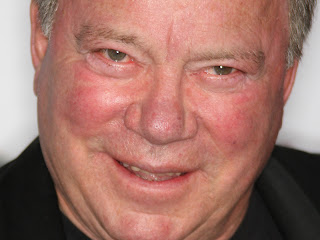 He's Baaaaaaaaaaaaaaaaaaack!
Happy Shatnurday!
May Good Shat happen to you!
Posted by Drake at 8:42 AM No comments: 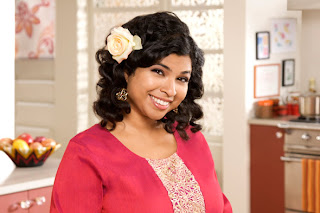 Aart Sequeira,
She's cute, curvy and a great cook and has her own Food Network TV Show. I love her accent and cheerfulness.
Posted by Drake at 8:39 AM No comments:

I have some great friends here on blogger and tumblr but sometimes it's great to see an old friend.
Something told me to go to Facebook tonight and farm my Farmville (which i'm turning into a Halloween land) and i got a FB chat box (usually it's my buddy Allan) and there was Janet.
She's my oldest online friend and one of the few i've met in real life, we're the same age and she lives in Hattiesburg MS where my Mom came from and where i spent a few summers as a child. I've known Janet since late 1994 and she's the reason you see me here and under the nickname "Drake".
It seems a long story but it isn't, i discovered IRC back in '93 and was sitting in my channel called "DrWho" when Janet popped up there by mistake, we got chatting and i discovered a whole online fandom of Doctor Who on a IRC net called Dalnet, i had to use another nickname there since "Steed" was taken and in 1995 i became Drake. I met so many people who became friends and then ex-friends over the past 16 years and found places to exist like Live Journal,My Space, IRC, Blogger, Facebook, Tumblr and a few other places, all because of friend Janet.
Thank you Janet and i needed our chat tonight and making me remember friend are for life.
Posted by Drake at 11:33 PM 1 comment:

Boy howdy it's been a stinker of a "new" season for the major networks (especially NBC). I have never watched the CW network so can't tell you what's on there or do i care. FOX is trying to rip-off the voice cast of the Simpsons (i know a show that probably should have ended 10 years ago but it's a cash cow for FOX and it funds most of the pricey flops that FOX keeps making every year and this year's expensive flop - "Terra Nova"), I can hardly watch anything on FOX for it's constant promos of GLEE and X-Factor, two crap shows i will never watch.
Most reality shows are not and they just waste your time but being cheap to make the Networks will keep making them for now. Here's some i wouldn't mind going away forever - Dancing With The Stars, American Idol, So You Think You Can Dance, Sing Off, X Factor, America Has Talent, Biggest Loser (this show i find so offensive for the bullying of fat people). To be honest there are two shows that i am addicted to - Amazing Race and Survivor.
NBC, the turd of American Networks...already two of their highly touted "HIT!" shows have been axed, Playboy Club and Free Agents and i'm sure Prime Suspect and please please the Whitney show (Boy Howdy does that show stink!). Prime Suspect is a travesty of the original British award winning series..Mario Bello is no Helen Mirren.
ABC....the Lifetime Channel of Primetime Networks, they don't make any shows for me (except for the Middle a very well made and funny sitcom and Castle a detective series on ABC it's such a rarity and it's done well) i'm not a gay man or a woman and there's nothing wrong with that but i'm not watching.
CBS, now this is the network i watch the most (when i'm not watching a DVD,cable nets or reading) the revamped Hawaii Five-O is better than i expected, love Mike & Molly, i'm addicted to Big Bang Theory, Amazing Race,Survivor and NCIS. How I Met Your Mother will never tell us that story and  i find that annoying but otherwise the show is good but seems a bit flat this year. Two Broke Girls...they need you know "writers" badly written and not funny but it's been picked up for a full season (so what do i know?) . Two and a half Men...i like Charlie Sheen and this was Charlie Sheen's show and replacing him was a stupid mistake, yes i know it's TV's number 1 SHOW! but it was that with Charlie, the show now is chopped up into two parts that don't really blend, the part with the old cast thanking themselves for being disloyal to Charlie to keep their paychecks and doing Charlie-less "comedy" and the Ashton Kutcher mug at the camera and being puppy dog cute part of the show storyline about his wife and how stupid he is part ( i find it amusing that Ashton who was supposed to be the anti-Charlie Sheen is now being exposed in real life to be just as much of woman chaser as Charlie and Demi Moore is heading to the divorce court or so they say...) Bring Charlie back Chuck Lorre you made a mistake but i guess your ego won't let you do that, CBS won't cancel the show now but i can't see it having another season.
OK this post waaaaaaaaaaaaay too long so i'll stop here.
Posted by Drake at 9:44 AM 3 comments:

So he finally kicked the iBucket. *shrug*
He made no difference in my life, i've never been a slave to inanity that is the Apple zombie world and have no need for anything apple, never used tham and never see any reason to.
As i understand it Mr. Jobs never gave a penny to Charity while the man all Apple zombies hate Bill Gates has given Millions away and bailed out Apple a couple of times.
I really see nothing to respect there.
I guess the Jobstians are waiting for Steve to arise in 3 days...
The death of Charles Napier actually affects me more, an actor i've liked for many a decade.
Rest in Peace Charles.
Posted by Drake at 11:08 PM No comments: 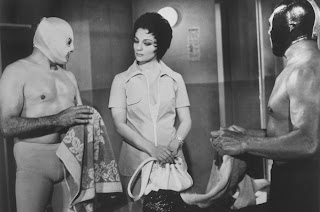 Santo always quick to help with folding laundry!
Posted by Drake at 9:21 AM No comments: 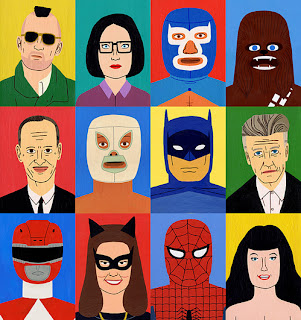 Tumblr find, wish i knew who the artist is.
Posted by Drake at 9:19 AM No comments: