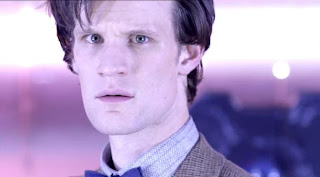 In my opinion Matt Smith is becoming one of the best Doctors ever. I don't look for hidden messages or go anal trying to critique ever episode and try to fit into some weird ass pattern that some so called Doctor Who fans have in their brains, they miss something essential...having fun.
If you have fun watching the show, enjoy it. If you think it's a load of clap trap...go watch a Stargate Beating A Dead Horse series or something.
In just 3 episodes Mr. Smith and Miss Gillan with the help of the Moff have returned fun to the series, Rusty's constant emo driven character plot overkills made watching Tennant's last season an up and down exercise but i still enjoyed the series but not as much as i am now.

Cannot mention how important Doctor Who has been for me since the early 70's when the best Doctor ever was on, Jon Pertwee. Just glad the fun and adventure is back.
Posted by Drake at 11:24 PM