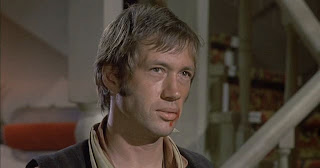 News reports saw that David Carradine has died at the age of 72, he was found dead in his Bangkok hotel room where was making a movie, something called "Stretch". Local media in Thailand initially reported Carradine had committed suicide by
hanging himself in his hotel suite, but the star's agent has told a U.S. TV
channel he believes the actor died of natural causes.
I remember seeing Carradine first playing villians in westerns and tv shows and then as Caine in the classic "Kung Fu" ( a series Bruce Lee wanted to star in but they gave it to Carradine ).
I think Carradine did some of his best work recently in the Kill Bill movies. As i get older more and more of my favorite actors pass away.
Rest in peace David.
Posted by Drake at 11:32 AM